Ben recently completed work on this OLIN/BCJ lead team to look at the what the City Branch in Philadelphia could become.  The plan is bold and in as much requires bold leadership from a variety of stakeholders, designers, and community members.

The City Branch is a SEPTA owned 2 mile long abandoned rail corridor that sits 30 feet below the surrounding cityscape.  It begins just east of where the Reading Viaduct transitions down to Broad Street.  It then passes under Broad Street and heads due West and disappears under Pennsylvania Ave, before jogging slightly and heading North.
The new below-grade park would extend from two points at the east end: the connection to the SEPTA Spur, where the rail viaduct dips under Broad Street (which is a bridge over the railway) and at Broad and Buttonwood in front of the School District Administration building. A key to the plan is the planned reconstruction of the Broad Street bridge, owned by PennDOT. The parking lot now in front of the School District building would be replaced with a multi-level public space leading to the park.1


New connections are made throughout allowing for a steady, unimpeded flow to create a safe and vibrant space to move along and through.  Conceived as a series of connected program, adjacent buildings are provided an opportunity to connect to the park whether its retail or education.  The entire length is meant to function as a stormwater capture and treatment system.

The draft of the Planning Commission’s Central District plan makes no mention of establishing a rail park and instead supports a Bus Rapid Transit line to take riders west to Fairmount Park.  This is viewed as an opportunity in that the width of the City Branch could allow for each to co-exist. 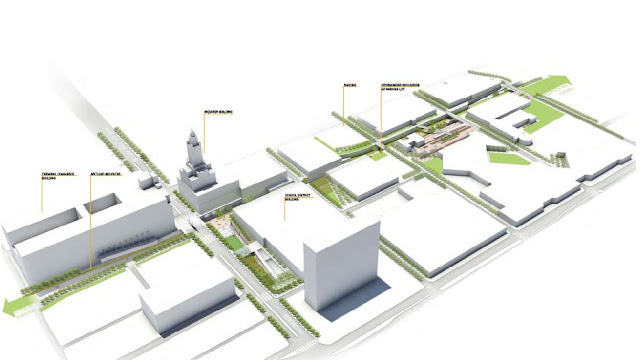 What is clear is that the current condition of the City Branch is such that it creates a drag on land use, property value, perception of safety, and overall health of the adjacent properties.  Why not imagine something better?  Well, we did.