The Sheikh Zayed Tower is named after the late Sheikh Zayed bin Sultan Al Nahyan, who was the founder and first president of the United Arab Emirates. Johns Hopkins Medicine and the UAE are in a partnership in which Johns Hopkins provides operational management of three UAE hospitals. The tower houses the Johns Hopkins Heart and Vascular Institute, advanced neurological and neurosurgical services, transplant surgery, trauma care, orthopedics, general surgery and labor and delivery. (1)

The Charlotte R. Bloomberg Children's Center, located in a separate tower, is named in honor of the late mother of New York Mayor Michael R. Bloomberg and Marjorie Tiven. The center includes a 45-bed neonatal intensive care unit, a 40-bed pediatric ICU, a playroom and kitchen and laundry facilities for parents. Mayor Bloomberg, a 1964 graduate of The Johns Hopkins University, is the largest donor of the Johns Hopkins Institutions, having donated more than $800 million since 1965, according to the release. (1)

A key design feature of the building, created in collaboration with Brooklyn-based artist Spencer Finch, is a shimmering glass curtain wall that covers much of the building's exterior. Perkins+Will worked closely with Finch and the project partnership over many months to integrate the architecture with the artist's concept. The result is a multi-colored two-layered fritted glass façade that incorporates Finch's unique approach to color. Its effect moderates the Baltimore light by day and transforms the building into a glowing composition of color and light by night. (3) 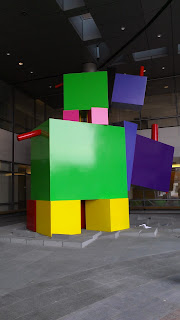 Art is a fully integrated into the building and surrounding landscape so that the entire site becomes a healing museum.  Through OLIN, Ben performed design and construction observation and worked with Robert Israel to conceive and develop a paving scheme that eliminated the need to create a railing around the Cubed Rhino at the Hospital Entry.

The gardens, including the Entry Court Gardens, the Western Courtyard Gardens, the Phipps Courtyard and the Little Prince Garden, along with the soaring lobbies, a handpicked art collection and cheerful-light filled patient rooms are designed to provide a welcome and caring environment to advance the healing process.

“This is an extraordinary project,” said OLIN Partner Susan Weiler. Johns Hopkins is creating a new standard of excellence for patient care and hospital design. The gardens have been designed as places of orientation, respite, rejuvenation and calm, with a visual simplicity that accentuates the aesthetic pleasures of the gardens. The newly conceived circulation pattern allowed us to keep one-third of the enormous football-field-sized site for the courtyard gardens. (4)

The gardens’ visual strength was inspired by the Finch glass patterns, designed to dissipate light.  “We extracted the modulation in the color patterns into the plants,” Weiler says.  “We used the greens, pinks, purples, yellows, blues and violets wherever we could.”
A paving palette of bluestone, brick, quartzite and granite provides visual continuity to both vehicular and garden spaces. (4)

“There’s a visual calmness, a serenity but a stimulus, from the aerial view,” she says.  “To see the gardens from above gives off an ameliorating effect on people’s well-being – you could call it all a healing garden.” (4)

(4) http://architectsandartisans.com/index.php/2012/04/the-healing-gardens-at-johns-hopkins/
Posted by Unknown at 9:28 AM