A New Building that Uses Algae for Energy 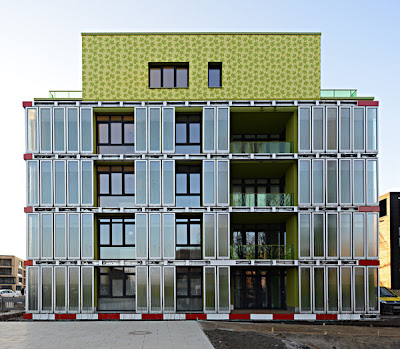 "A grounbreaking new building in  Hamburg, Germany, "intends to generate heat, as well as revenue, from growing the micro-organism. The five-story Bio Intelligent Quotient (B.I.Q.) building, which was expected to become fully operational on Wednesday, has a high-tech facade that looks like a cross between a Mondrian painting and a terrarium but is actually a vertical algae farm."1


"Lukas Verlage, managing director of the Colt Group, part of the high-powered consortium that constructed the energy system, said in an e-mail that the building was “an outstanding and important development in the use of renewable resources in building technology,” comparable to advances in the space program."1 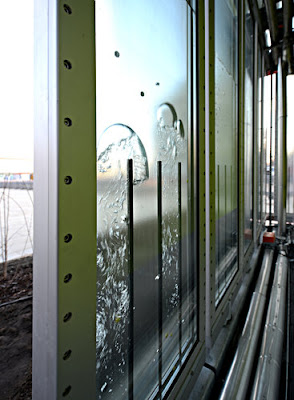 "And Rainer Müller, press officer of the International Building Exhibition, which introduced a competition in 2009 that led to the creation of the B.I.Q. house, said, “Using algae as an in-house energy source might sound futuristic now, but probably will be established in 10 years.”
The competition, won by a consortium including the Colt Group, asked entrants to use smart materials, defined as “systems and products that behave dynamically, unlike conventional building materials, which are static.”1


Read the complete New York Times article here:
When Algae on the Exterior Is a Good Thing

WORKS CITED:
1  http://www.nytimes.com/2013/04/25/business/energy-environment/german-building-uses-algae-for-heating-and-cooling.html?pagewanted=1&_r=0
2  All images courtesy of the NY Times
Posted by Unknown at 9:57 AM