Working at a highly successful design firm certainly has its benefits.  The latest is OLIN's indulgence of a scheme that myself and Ben Lawrence conceived as part of an in house design competition for PARK(ing) Day.  PARK(ing) Day is an international event that invites citizens everywhere to transform metered parking spots into temporary parks.
We faced stiff competition and were narrowly awarded the honor.  We used this rendering to present our idea and soon realized, as we were presenting how difficult it would really be. 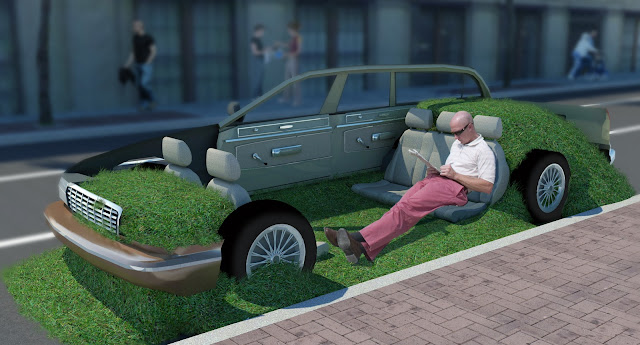 Our idea arose from two places:  the first was our struggle with the notion that somehow removing a functional space to showcase a park was a worthy endeavor and the second was the unique way in which people in vehicles experience public space.  While piloting a vehicle people are both engaging in a public discourse while maintaining a certain amount of autonomy from within that vehicle.   We reconciled both of those ideas by leaving a car in the space, and then bringing the public realm into the vehicle.  The final concept, titled This is a Park, is both a public space and a private experience—a place for a car and a place for a park.
It was a studio-wide effort with folks chipping in to create signage, secure materials, and rolling up their sleeves to help construct and deconstruct the installation.

OLIN was excited to participate in public discourse about the value of parks in our cities. PARK(ing0 Day aligns with the studio’s commitment to the possibilities of the urban realm believing it to be where design can affect the most positive change.

OLIN partnered with Big Head Salvage Yard to obtain and construct a broken down car that will be returned to the yard after PARK(ing) Day. Groundswell Design Group also generously supplied the project’s sod.  NextFab contributed laser cutting time for our signage.  Thanks so much to everyone for your help in making this a success!
OLIN's Library and Archives Manager, Karl-Rainer Blumenthal is a highly talented film maker in his own right, and put together this video of the event:


For footage of OLIN’s Park(ing) Day 2011 entry This is a Park see below:
newsworks (NPR's WHYY)

The Next Great City: Philadlephia