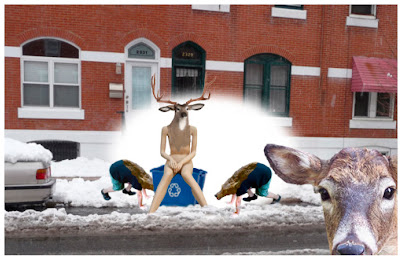 (a)biotic is proud to announce that our Space Savers Project submission was selected for display during the On-Street Exhibition Day on December 10th as well as the Gallery Exhibition at Breadboard’s EKG Gallery on December 16th.

The Space Savers Project creates a citywide public arts exhibition out of the Philadelphia custom of “saving” on-street parking. Saving public parking spaces, while technically illegal, is widely practice throughout the city. Items like recycling bins, upturned garbage cans, cinder blocks, and broken furniture are traditionally used as space savers. While they are effective, they are also visually crude and imply threat/possession. This is public art project as well as an environmental and social experiment. There was a call on artists to design and create alternatives to the objects traditionally used to save spaces, and our entry, Territory, was selected.
Stay tuned for more updates, below is an explanation of our concept:
Saving parking spaces is silly. It is a quirky consequence of the friction between the benefits of dense urban living and the social strain brought about from that density. The thin line between human and wildlife behavior is indeed so thin that in many respects it is nonexistent.

This idea is not unique.  It finds its roots in the well known Greek mythological tale of Theseus and the Minotaur.  Theseus, the human hero, volunteers to enter a Labyrinth created on the Island of Crete by King Minos to slay the murderous Minotaur who presides within its walls. Theseus represents the learned, rational, and logical portion of the human condition while the Minotaur represents a human condition where baser, animalistic reaction and passion dominate reason and understanding.  With its half human half bull appearance, and its bloodthirsty need to destroy all who enter his labyrinth, the Minotaur becomes a representation of human acting as a beast.

The practice of saving parking spaces reminds that human behavior is not always far from that of the other beasts that roam, or once roamed the earth. To celebrate that, we proposed the urban wildlife space savers called Territory. We contrast wildlife and human mannequins in Minotaur-esque combinations to call attention to and reflect our own behavior.  Conceptually we understand that we do not own the parking space claimed, but yet our animal instinct compels us to claim “our” territory.  There is humor in the “Territory” approach that holds a mirror to the inherent Minotaur-like “saving” of a parking space.