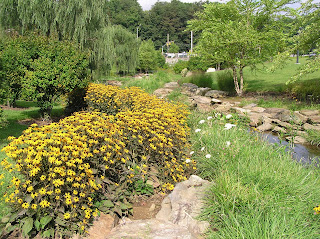 The Kraut Creek restoration project was initiated in 1995 as an integral part of a larger project pursued by Appalachian State University to replace its central energy plant, relocate its baseball stadium, realign Rivers Street, and to create a new entrance into their Campus (Hobbs, 2006).  There had been little to no research at that time done on stream restoration so this project represents an educated attempt to recreate a mountain stream in a high density downtown environment.

The creek was originally channelized in the mid 1960s resulting in frequent high velocity flooding.  The damage and repair costs associated with this condition encouraged the University to seek a long-term solution.  This solution involved a revolutionary idea at the time:  daylighting the stream.


As one of the pioneer attempts to balance art and science on a malfunctioning urban stream, this project looked to:  meander the stream to increase sinuosity to control velocity and to mimic the mountain stream context, carefully place wiers for function, visual effects, grade transition, and to create a step pool system.


Although in its infancy at the time, stream restoration, or daylighting as it was called then, was the lynch pin of this project.   A study was done of surrounding streams and a functional and esthetically pleasing stream was created.  Important features such as meander and step pools were incorporated.  The floodplain was sculpted to reduce velocity and spread the water flow.  When it wasn’t flooded, these areas form passive use and visually amenable experiences.


As a gateway to the University, this space links the downtown where many students reside to places where they attend classes.  It features two well used bus stops and tennis courts.  These amenities provide a desirable place to see and be seen and help to activate the park.  All of these nodes create a vibrant and well used park.  In addition, internal activity is created by a pedestrian loop trail.  Surrounding mountain stream morphology was analyzed and recreated with this design.  Native plants were also used to help recreate the sense of surrounding mountain  character.


As part of the gateway creation aesthetics and function meld to provide a balance between pedestrian circulation and recreation.  The quality of the aesthetic experience as well as the functionality of the floodplain design and trail layout help to create a picturesque mountain identity for Appalachian State.

The portion of this trout water stream to be restored represented the last section of the watershed.  The watershed itself had over 1/3 of its lower area urbanized with no stormwater controls in place.  This resulted in an increased frequency of high flash floods.  Designers had to contend with this as a design constraint in terms of the function of the stream but as a real threat during construction (Hobbs, 2006).  A major event did occur during construction, and the damage was significant.  Undeterred the project went through.
As noted this presented a challenge to designers that resulted in way was perhaps a restoration that was less successful from an ecological point of view.  Without the pool riffle sequence now utilized this stream does not provide the types of habitat necessary to support a complex stream food chain.  The meander was not created using hydrological calculations.  The calculations developed as well as new construction techniques reduce cost and provide tested long-term stability.  As it stands there are a few, what stream engineers call, nick points where there is some soil erosion.
Important lessons learned include recognizing and enhancing the existing activity nodes as well as the idea that new nodes can be created within a park setting (i.e. tennis court, trail, and bus stops).  Additionally, it is important to note that newer methods for stream design would have helped this stream function better and help to avoid some of the nick points Kraut Creek now has.  From a design standpoint many regard this as a shining example of an esthetically pleasing and successful urban stream restoration.
Posted by (a)biotic design studio at 4:46 PM