Chicago To America: "We Have The Greenest Streets!"

Chicago may be known as a gritty, rust belt city, but lately they are looking more and more like a city that is trying to innovate its way out of a downward spiral that unfortunately affects many of the aging cities in that region (see also Detroit, Cleveland, etc). Case in point: the Chicago Department of Transportation (CDOT) late last year "unveiled the first phase of their “greenest street in America” project. Located on a 1.5-mile stretch of Cermak Road in Chicago’s Pilsen neighborhood, the street is made with air pollution-eating materials and features solar panels, native plants and stormwater-sucking pavement, among other impressive technology. The street’s success has since launched the city into the national limelight for innovative planning and design."1


This is an interesting claim, but lets unpack this claim a little and dive in to as many of the details as we can.

According to CDOT, this is the first commercial roadway application of photocatalytic concrete. We currently drafting a reasearch article on photocatalytic concrete but right now it looks like pretty amazing stuff. Imagine if you will, an abiotic material that not only cleans itself but also pulls carbon out of the air. The concrete’s "nanotechnology absorbs nitrogen oxide (i.e. car exhaust) from the air and cleans the road’s surface through a sunlight-powered reaction. The process uses titanium dioxide, so it’s not all roses — mining and chemical processing are needed to get titanium dioxide — but it’s a great application of the pigment. The sidewalk concrete uses more than 30 percent recycled content, and the cement’s reflectivity reduces the urban heat island effect."1 In this case it is worked into a road surface, but there are other possibilities, and something that looks to good to be true should be investigated further before we all start trumpeting it as the end-all be-all to global warming. Please stay tuned for our more extensive research!

On a more well known and tested note, they have incorporated stormwater capture where the "street diverts close to 80 percent of rainfall from the sewer system through permeable surfaces, rain gardens and street trees." The State of Illinois agreed to an Clean Water Act settlement consent decree with the EPA, the Department of Justice (DOJ), and with "the Metropolitan Water Reclamation District of Greater Chicago (MWRD) to setlle a court case under the Clean water Act relating to Chicago's combined sewer system which during times of heavy rainfall results in combined sewer overflows (CSOs) into Lake Michigan and other water bodies. The settlement requires upgrading Chicago’s sewer infrastructure to reduce combined sewage overflows. The legally binding settlement mandates that MWRD make critical structural changes to improve the quality of Chicago’s waterways and includes green infrastructure projects to reduce runoff."2

The re-use of this runoff and plant selection in the CDOT solution eliminates the need for potable irrigation water. A wind and solar-powers the lighting system with LEDs. To complete their Green Infrastructure intervention, a half-mile of bike lanes. Sidewalks are made more walkable with a pedestrian refuge island — "which separates crossing pedestrians from motor vehicles — and curb-corner extensions that allocates more street space to pedestrians. CDOT also created educational signage and a walking tour brochure." 1

So the big question is, how much does this intervention cost? The near $14 million for the mile-and-a-half-project comes out to around $88 per square foot if you assume a 60' Right Of Way. "Funding came from Tax Increment Financing and assorted grants from the Federal Highway Administration, Illinois Environmental Protection Agency, and Midwest Generation. "1 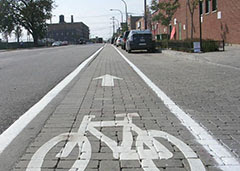 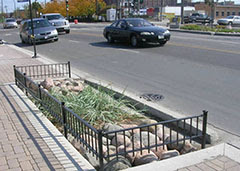