The Beetles Take LA...And It's Way Worse Than Ringo and Paul Going It Alone

"No one is certain how it got here, but the Polyphagous Shot Hole Borer (PSHB) is a new pest in Southern California. This boring beetle, from the group of beetles known as ambrosia beetles, drills into trees and brings with it a fungus that is lethal to some species of trees."


Description
"The beetle is dark brown to black and tiny, with females between 0.07 and 0.1 inches long, and males even smaller, usually about 0.05 inches long. Pregnant females bore through the tree’s bark, creating galleries under the bark. They plant the fungus in these galleries, where it grows and spreads throughout a susceptible tree. The female then lays her eggs in these galleries and when the eggs hatch, the larvae eat the fungus.  The larvae develop into adults in about a month. Many more of the larvae develop into females than males, and the females mate with the males (their brothers) while still in the gallery. The pregnant females then pick up some of the fungus in their mouths, and leave through the entry holes created by their mothers to start the process again."

What Is Known
"The PSHB seems to have originated in South East Asia or Africa. At first, researchers identified it as the Tea Shot Hole Borer (Euwallaecea fornicatus), which it very closely resembles, but DNA evidence points to it being a new, as yet unnamed species in the same genus. The symbiotic fungus may also be a new unnamed species, in the genus Fusarium, which is commonly associated with ambrosia beetles."

By 2011, it had infested the first of hundreds of trees at the Los Angeles County Arboretum and Botanic Garden in Arcadia and the Huntington Botanical Gardens in San Marino. By the spring of 2012, alerts were being issued throughout the avocado industry.
Now, scientists are warning that a new species of beetle, tinier than a sesame seed but devastating as poison, has gained a foothold in Southern California, threatening scores of tree species, including the native California sycamore and the iconic coast live oak.
“This has been like something out of a science fiction novel,” says Tim Thibault, the Huntington’s curator of woody collections. Thibault says the bug initially was assumed to be an exotic pest called the “tea shot hole borer” that afflicts tea plants in Asia. But when it turned up on more than 100 species, killing some in less than two years, DNA tests revealed that both it and a lethal fungus it carries were new to science." 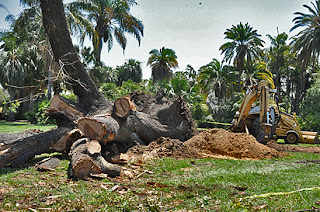 Its Spread
"So far, scientists say, the new beetle has been found throughout Los Angeles and northern Orange Counties, as far south as Laguna Beach, as far north as Azusa, as far east as Pomona and as far west as Los Angeles International Airport, where it has infested a stand of coral trees.

Whether it has spread to wildlands such as the Santa Monica Mountains is as yet uncertain, but researchers are hoping a January 12 symposium at the Huntington for arborists, gardeners and homeowners will help track the infestation."

Management
"Protect your trees and local habitat from a variety of pest species by avoiding moving infected wood around – use firewood locally.

PSHB has been found to attack healthy trees, but as always a good defense against disease is to keep trees in optimal health. Healthy trees are also more likely to recover more quickly from an attack. Choose trees that are appropriate for the site and don’t require a lot of additional water. Provide appropriate soils and access for roots to grow and expand.

Avoid excessive pruning, over- or under-watering, and planting inappropriate companion plants within the drip-line. If trees are infected, systemic insecticides generally are poor for treating ambrosia beetles. Prophylactic spraying of the bark could be used to protect uninfected trees in some situations. Sterilize pruning tools between uses to avoid spreading the fungus. Chipping and solarizing/tarping infested wood may help to limit the spread of the beetle/fungus complex.

If you think PSHB is affecting your trees, please contact your local Agricultural Commissioner's office. In Los Angeles County,click here."

Positive Take-Away
"Some trees are less vulnerable than others; the main concern is for the 20 or so species of trees in which the beetles prefer to reproduce. Eskalen says the fungus, carried in the beetle’s mouth, is what kills the trees, and it spreads as the beetle burrows to lay eggs in the heartwood, attacking the plant’s vascular tissue and blocking the flow of water and nutrients."

Email ThisBlogThis!Share to TwitterShare to FacebookShare to Pinterest
Labels: science